Oran is the second largest city in Algeria with a population of approximately 800,000. Located in the Western part of the country on the coast it rapidly became the major industrial center and port during the French Colonial Rule. Shown above is a photograph of what seems to be a sprawling boulevard during the first quarter of the 20th Century in what almost appears to be a European city somewhere along the Mediterranean coast. The photo postcard is by Leon and Levy.

A very fine view of an Algerian elder man in traditional garb, this photo postcard is by an editor PH & Cie in Nancy, France.

A somewhat older view, by perhaps 10 years, is this one of two Tunisian women  going about their chores, one who prepares the couscous the traditional North African Arab meal and one who combs wool to be spun.

This photo postcard is by Neurdein Freres.

Of a completely different setting is this portrait of a Tunisian Arab. The postcard is by the photographic studio of Lehnert and Landrock, located in Tunis. 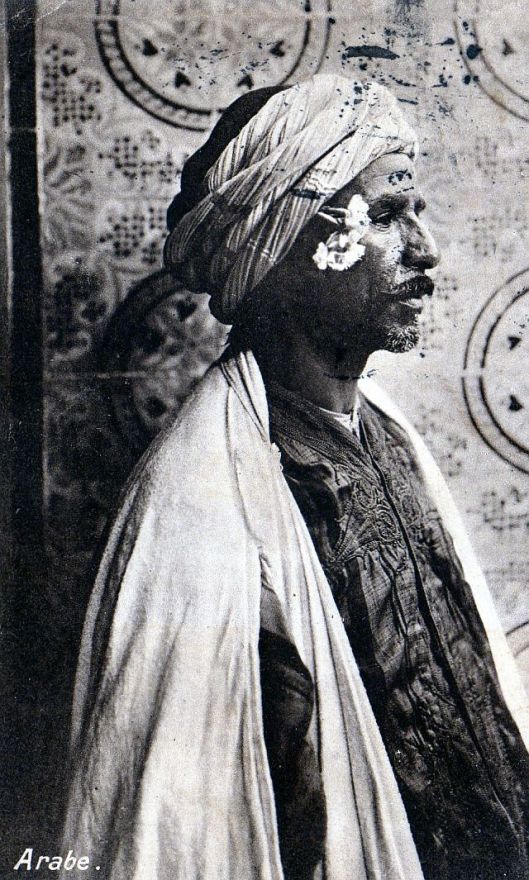 Those who expect exotic scenery will not be disappointed in this traditional snake charmer street scene somewhere in Tunis.

Though the photo postcard carries the LL mark it is not by Leon and Levy, but according to the back of the card by Levy and Neurdein Reunis. From the dress it is to be dated probably around the 1915-20’s. A very interesting and obscure view is by the Tunisian photographer J. Andre Garrigues.

A favorite topic of Garrigues were Jews especially women. This photo postcard is of a Jewish cemetery in Tunis. This is another proof of Jewish and Arab coexistence along the shores of the Mediterranean. More on Garrigues can be found on the luminous-lint website and at the imj website. Both of these websites are SUPERB!

If some of you were wondering whether there were Jews living in Tripoli, Libya the answer is YES. Here is a view of the Jewish cemetery along the shore in Tripoli. This colored card dates from the first quarter of the 20th century and has an Italian language title on the top. No photographer or editor-publisher is indicated on the backside of the postcard.

Photo postcards are a wonderful part of the past not manipulated by the media at the time they were made. They were not made for the media but were sold often in large editions to people who had a genuine interest in showing to others their  travels and the people they met. Muslims, Jews, Christians along these shores lived side by side and not under so called Sharia laws, as the propaganda from the Muslim Brotherhood would like all of us to believe today. You wonder if these photographers would be free in many of these different North African lands to make similar photos today.